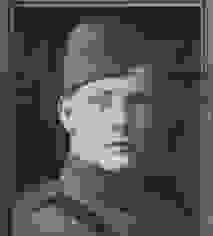 Alan had an affinity for the military at a young age, so on his 18th birthday, April 1917, he was off to pilot training. By August 1917, Alan was on his way to Britain where he joined his squadron. On March 21, 1918, over Albert France, Second Lieutenant McLeod, with his observer in an FK8, destroyed an enemy triplane and was immediately attacked by eight more, two of which they brought down. McLeod's bomber was hit in the petrol tank and the plane burst into flames. Both pilot and observer were badly wounded. McLeod, by side slipping the plane steeply, tried to keep the flames away from his observer. He was able to crash land the plane in No Man's Land, and not withstanding his own injuries, dragged his comrade from the burning wreckage. Under heavy enemy fire McLeod carried his companion on to comparative safety before collapsing from exhaustion. At the age of 18 years, Alan Arnett McLeod, became the youngest Canadian pilot ever to be awarded the Victoria Cross in World War I.

On Sept. 5, 1918, King George summoned the young hero to Buckingham Palace and decorated him with the Victoria Cross, the highest military decoration in the world.

After returning to a hero's welcome in Stonewall, McLeod died of pneumonia on November 6, 1918, after contacting influenza.

Check out all the resources available at the Canadian Virtual War Memorial.

We are excited to announce that our dining rooms are open again! We are limiting the restaurant to a maximum of 6 customers at one time and all guests are required to provide contact tracing information and adhere to the current health orders.  Reservations are strongly recommended.